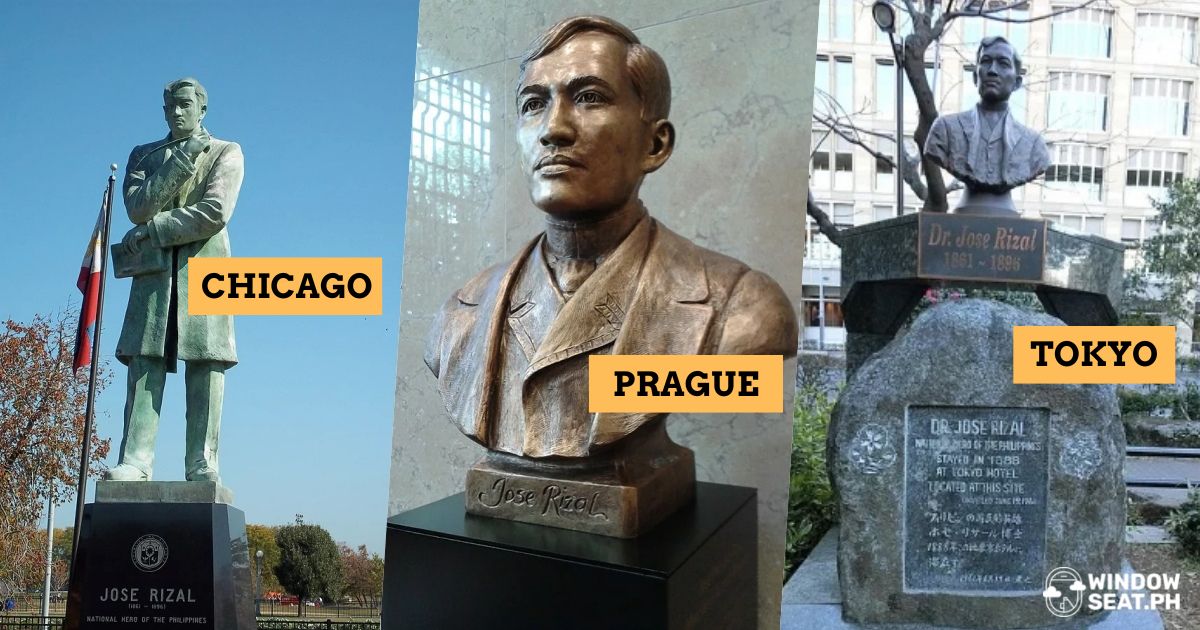 Jose Rizal was quite the traveler too.
by Ina Louise Manto | December 29, 2022

Did you know that there are quite a number of monuments of Jose Rizal around the world? As we remember our national hero and his legacy this December 30th, check out these photos of markers, landmarks, and monuments you’ll find from Asia to Europe:

via The Philippine Consulate General in Xiamen, China

Standing 18.61 feet tall, this monument in China is the tallest Rizal structure outside of the Philippines. This commemorative park recognizes the national hero’s Chinese roots. Rizal is a descendant of Cua Yi Lam, a Fujian native. 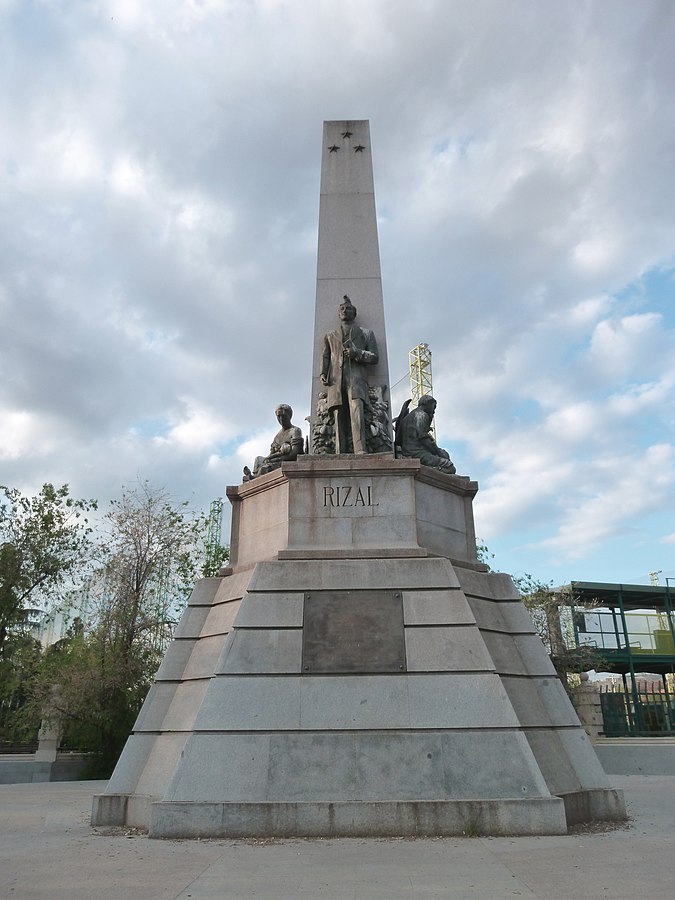 Rizal had plenty of professions, one of which was being an ophthalmologist and surgeon. He lived and studied in Spain, where he continued studying medicine at Universidad Central de Madrid. This monument at Avenida de las Islas Filipinas and Calle Santander is identical to his Luneta monument. 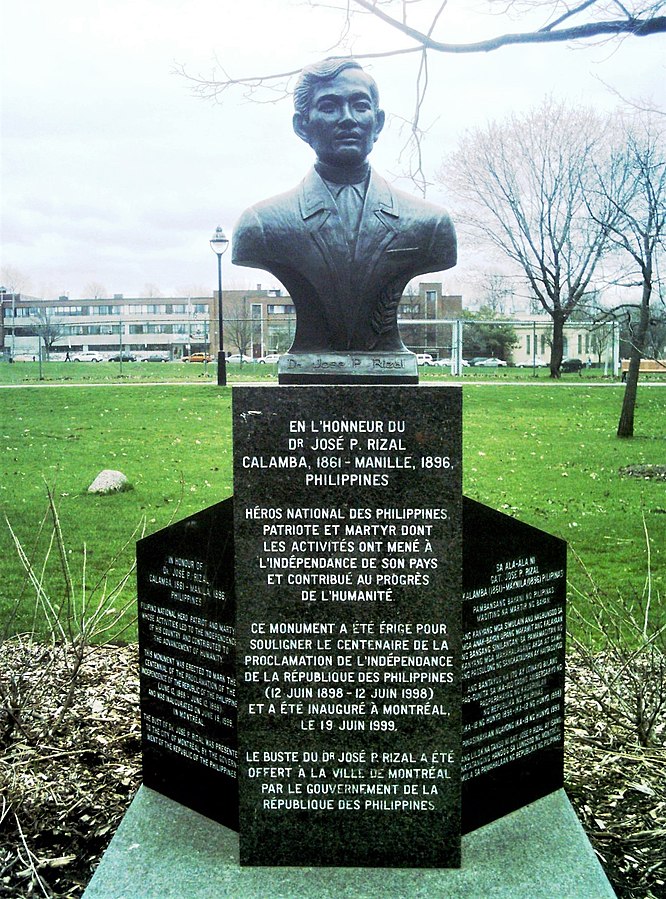 This monument in Parc Mackenzie-King commemorates the centenary of the proclamation of independence of the Republic of the Philippines. 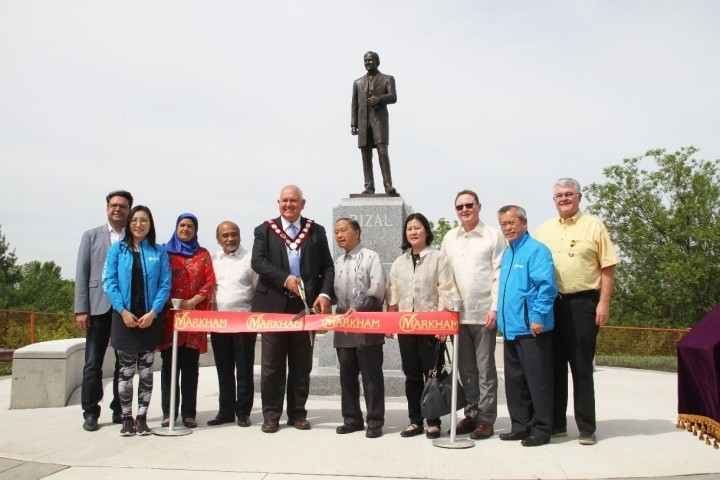 This monument was unveiled as part of the Filipino-Canadian community’s celebrations of the 121st anniversary of the declaration of Philippine Independence. 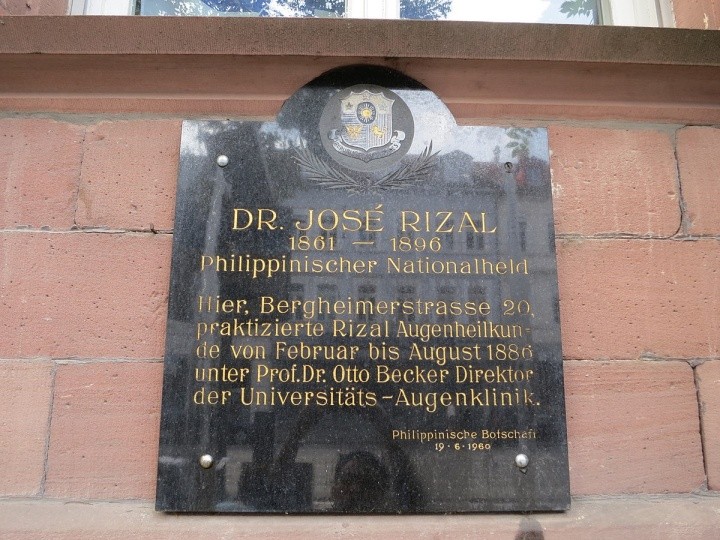 Rizal attended lectures in ophthalmology at Alte Universitat at the University of Heidelberg. 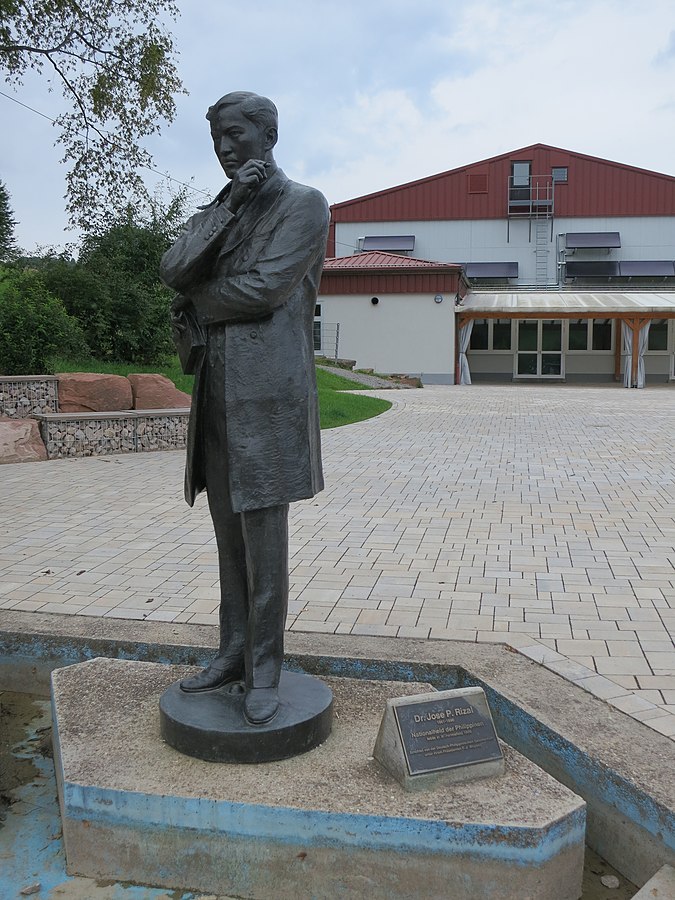 While studying in Heidelberg, he met Pastor Karl Ullmer, who he became friends with. From April to June 1886, Rizal stayed with the Ullmers at their home in Wilhelmsfeld, where he wrote the last chapters of Noli Me Tangere. 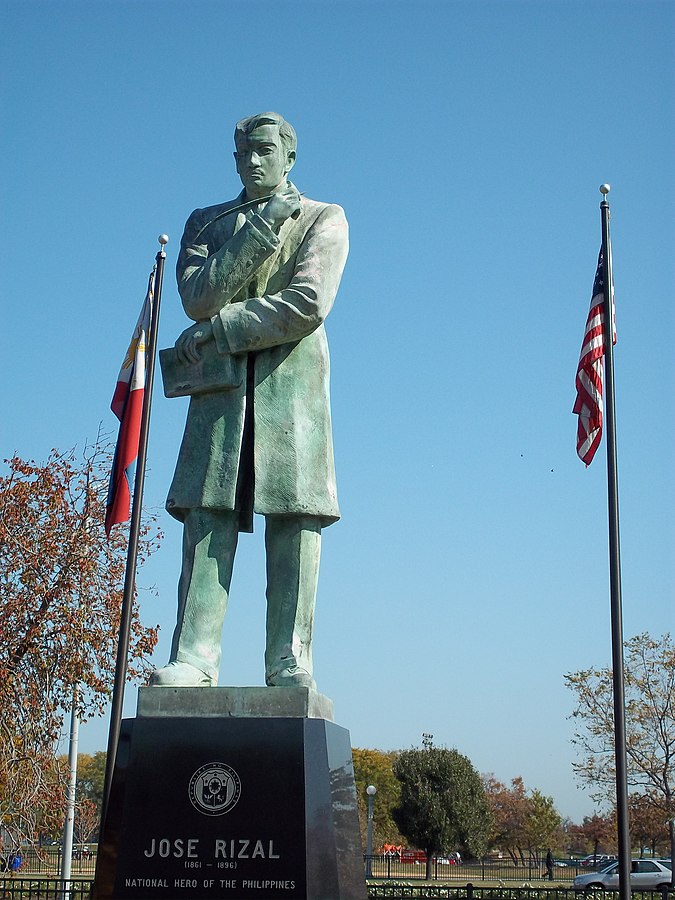 This monument commemorates the 100th anniversary of Philippine independence. 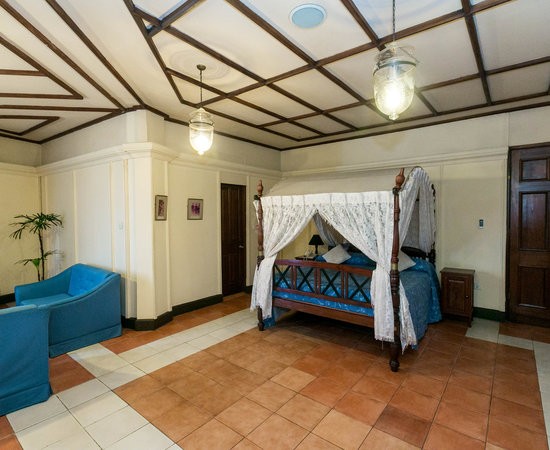 If you ever find yourself in Sri Lanka, stay at the Grand Oriental Hotel in Colombo. The national hero has a suite named after him, after he stayed there in 1882. 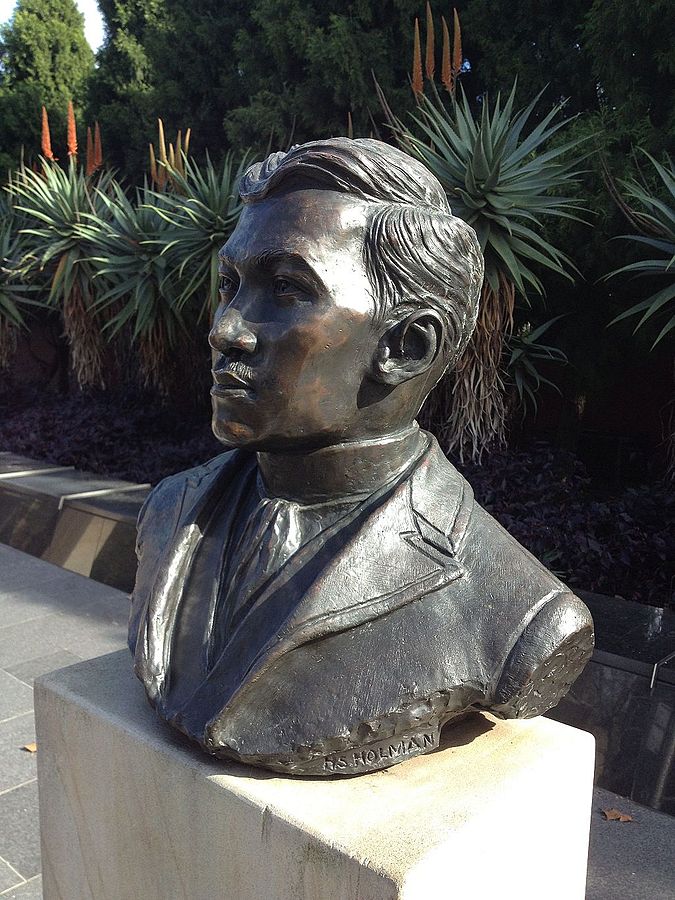 The Plaza Ibero Americana opened in 1988 to acknowledge the contribution of Spanish and Portuguese-speaking people to Australia. The plaza has two statues and 11 busts by different nations including Argentina, Bolivia, Chile, Colombia, Cuba, Ecuador, Spain, the Philippines, Mexico, Peru, Portugal, Uruguay, and Venezuela 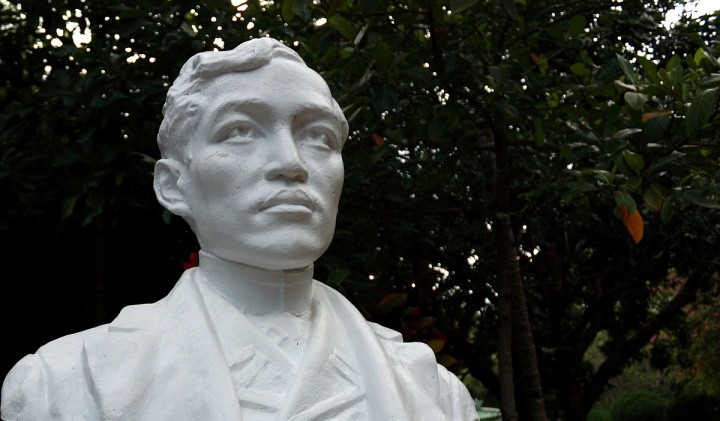 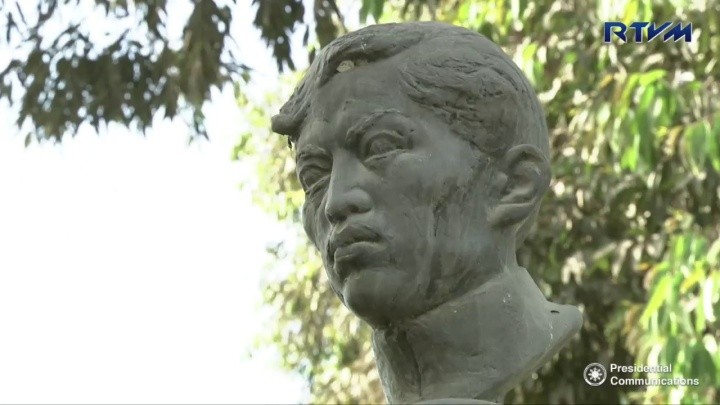 The Jose Rizal Park in Lima is the first public park in Peru named after a national hero of a foreign country. 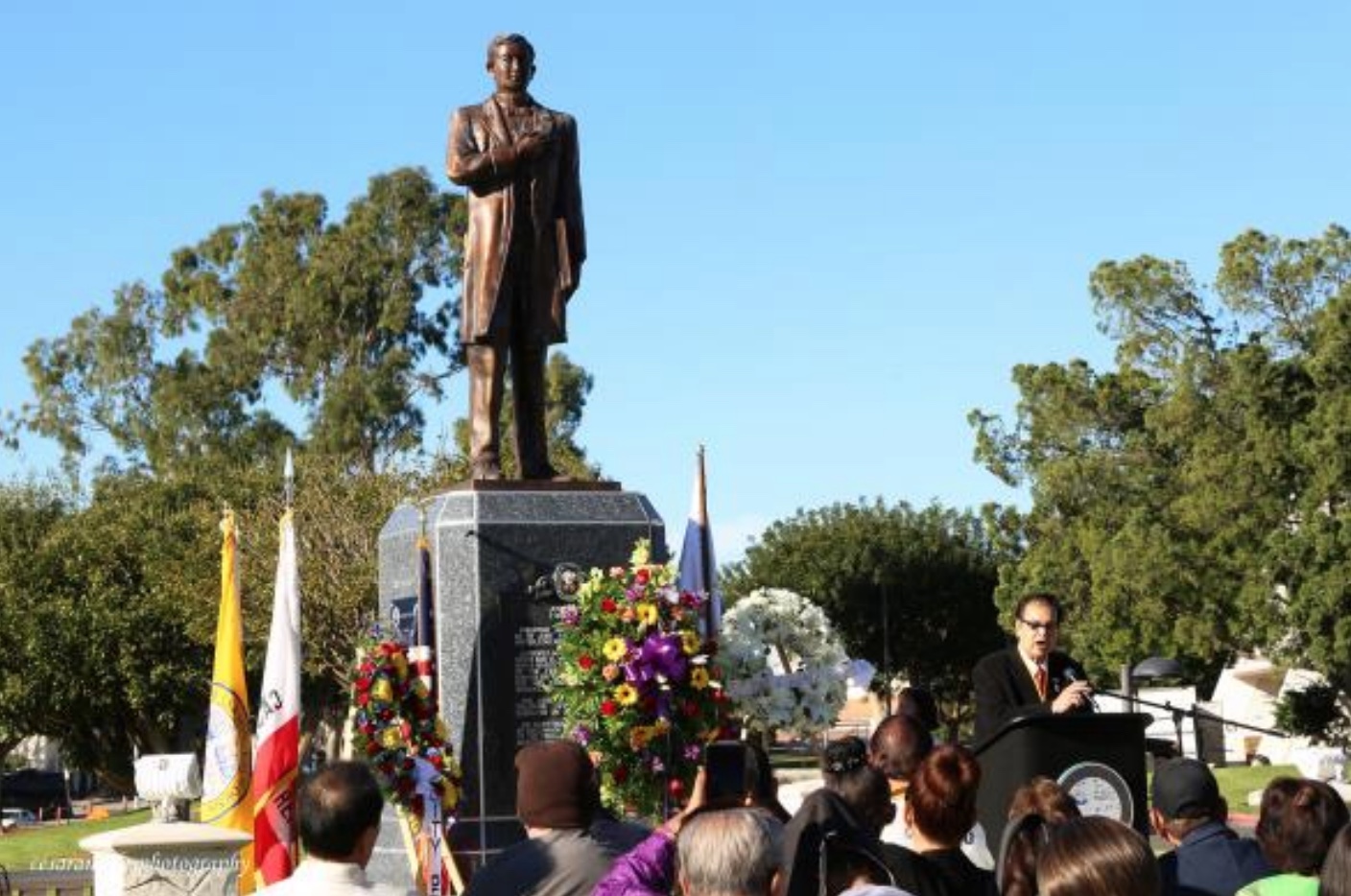 This monument was installed in commemoration of Jose Rizal’s 150th birth anniversary. 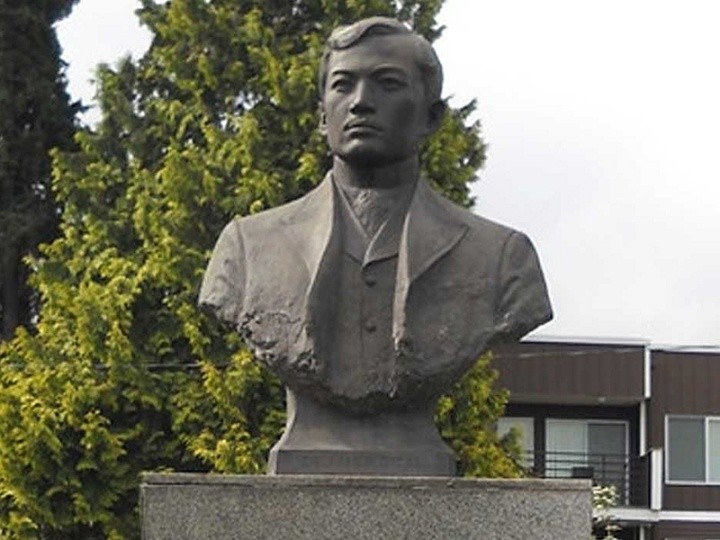 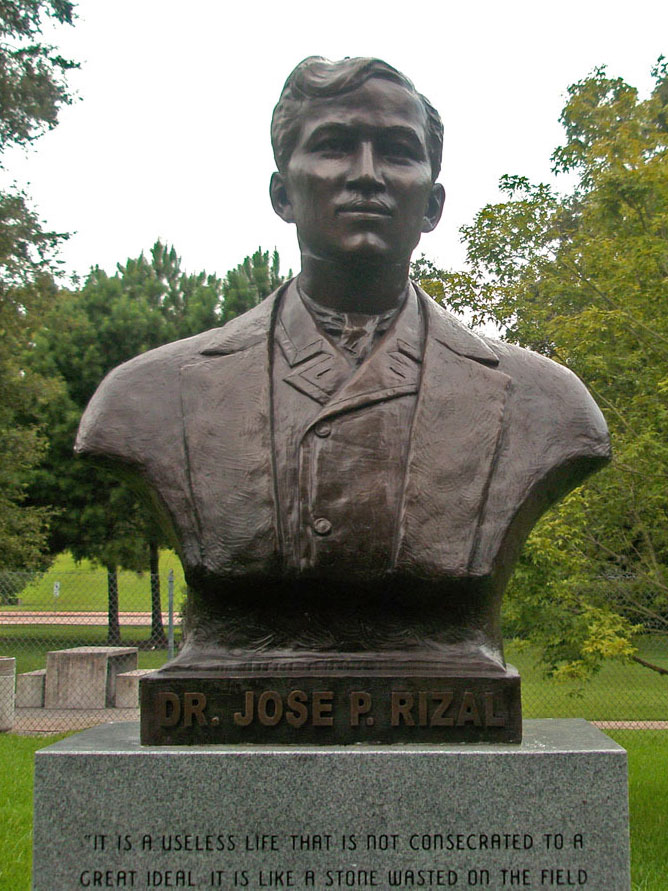 The Hawkins Sculpture Walk has ten busts of notable historical figures from around the world. The park also includes full statues of Confucius, Mahatma Ghandi and Martin Luther King, Jr. 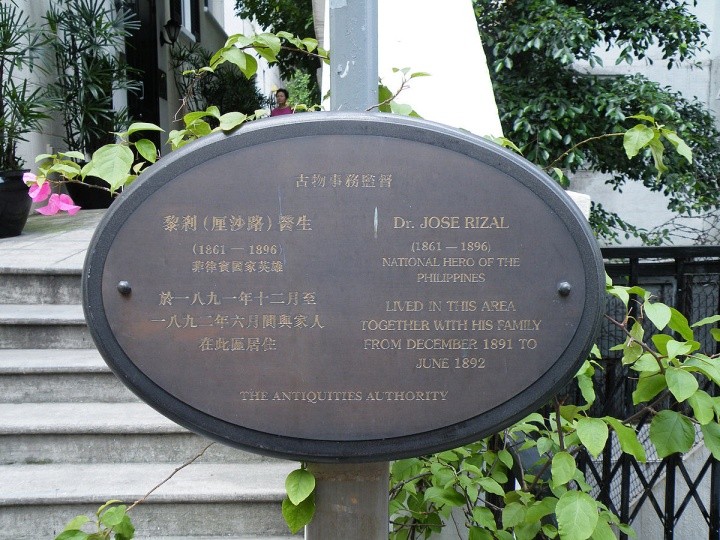 Rizal and his family lived in the residential area after their eviction in Calamba, Laguna in 1891. 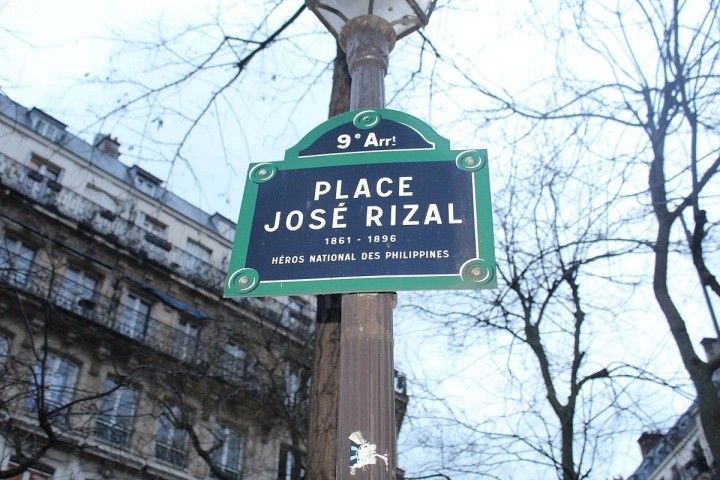 Rizal stayed in Rue Maubeuge in Paris from 1889 to 1890 with Valentin Ventura, a wealthy Pampangueno friend and member of the La Solidaridad.

This monument was constructed in commemoration of the hero’s 150th birth anniversary. 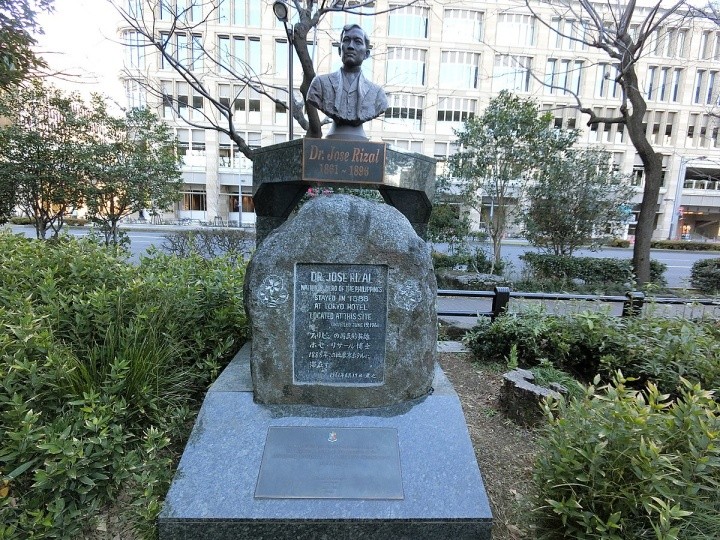 This bust is located at the site of the Tokyo Hotel, where Rizal had stayed in February and March 1888 before traveling to Europe. 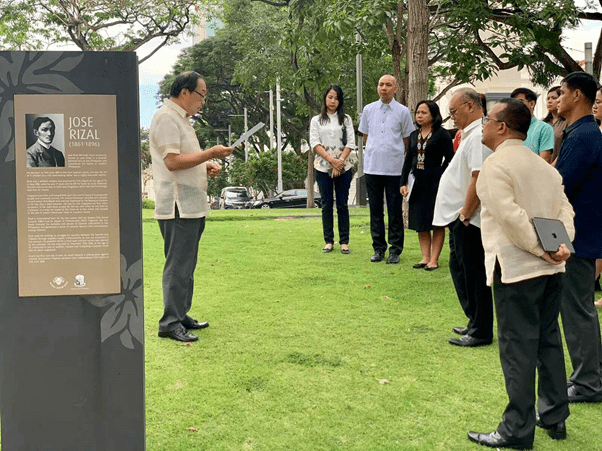 via Philippine Embassy in Singapore

Location: In front of the the Asian Civilizations Museum at 1 Empress PI, Singapore

When Rizal visited Singapore in 1882 for two days, he toured the island by carriage, visiting the old British colony — where this monument stands. 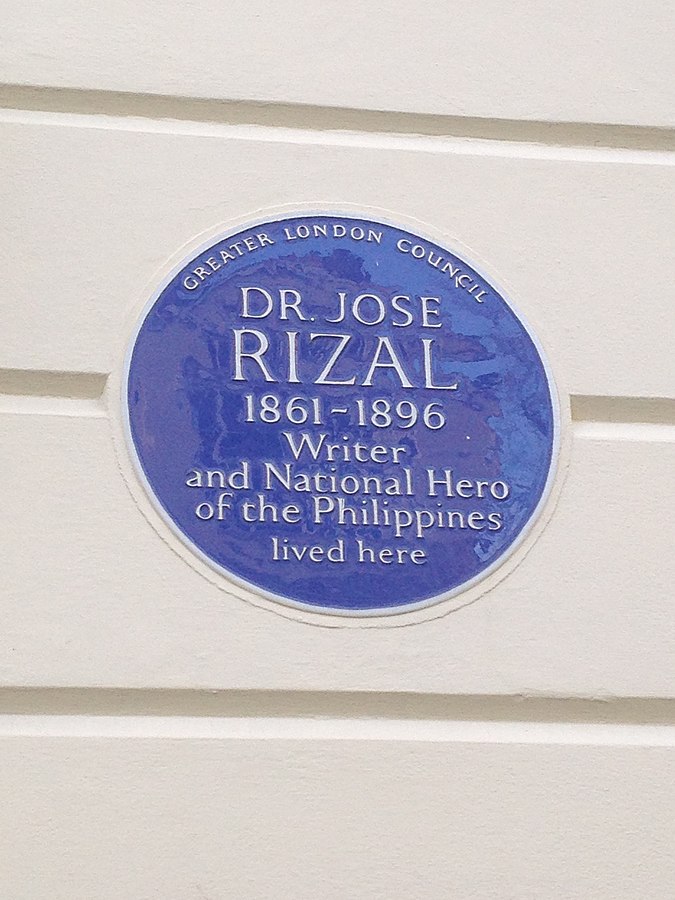 Rizal stayed in London for less than a year with the goal to establish the formation of the Association Internationale Des Philippinistes or the Philippine Studies. Though he wasn’t able to accomplish that during his stay, his trip to London enriched Rizal, and he left Great Britain a changed man. 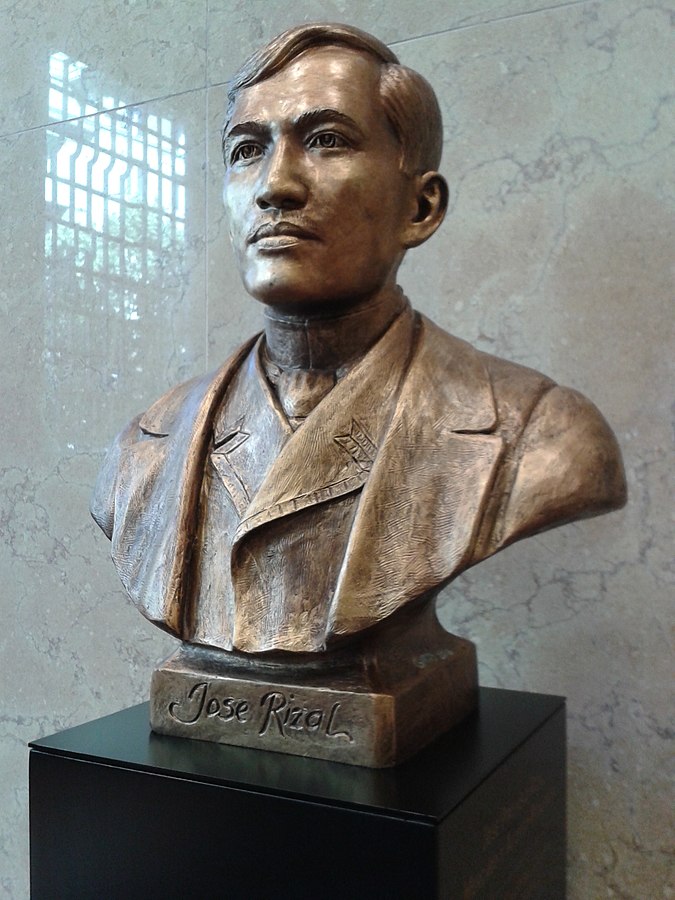 This bust commemorates Rizal’s 1887 trip to Prague, which was then the capital of the former Kingdom of Bohemia. While there, Rizal met with scientists, including the botanist Heinrich Willkomm, who Rizal collaborated with during his exile in Dapitan.

How many of these Rizal monuments have you visited? 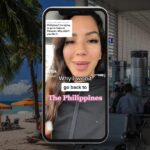 LOOK: Tiktoker Shares Why She Doesn’t Want to Go Back to the Philippines Previous 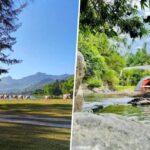 Adventure in Nature: 8 Campsites Near the Metro to Visit this 2023 Next 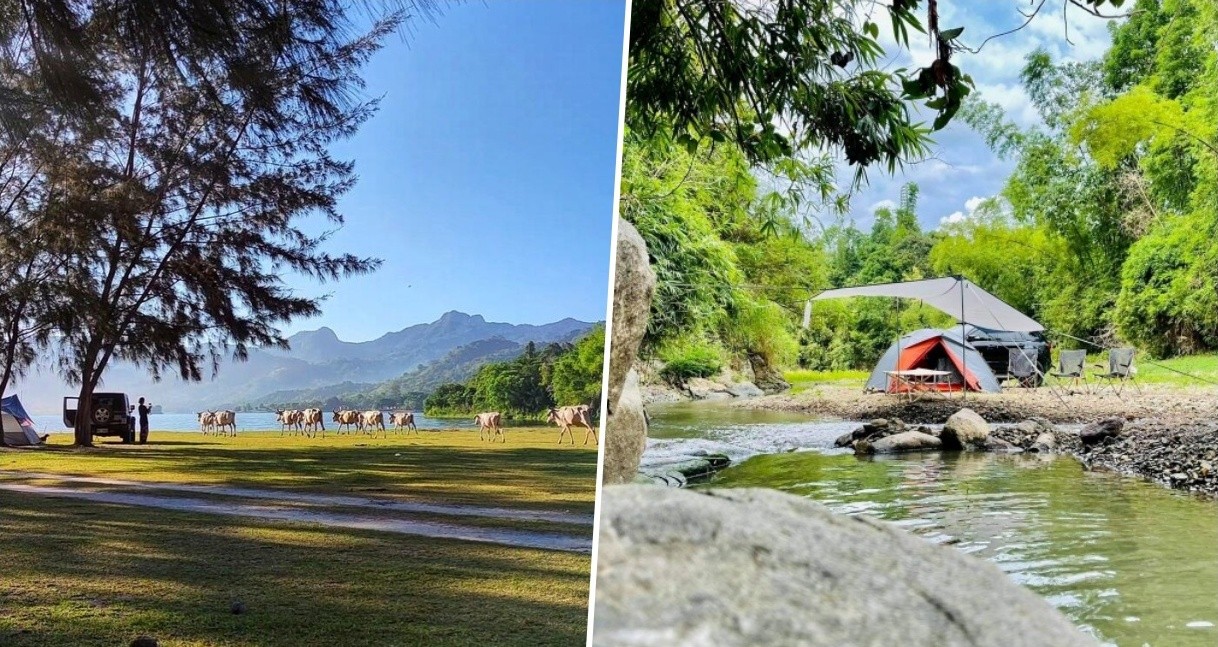 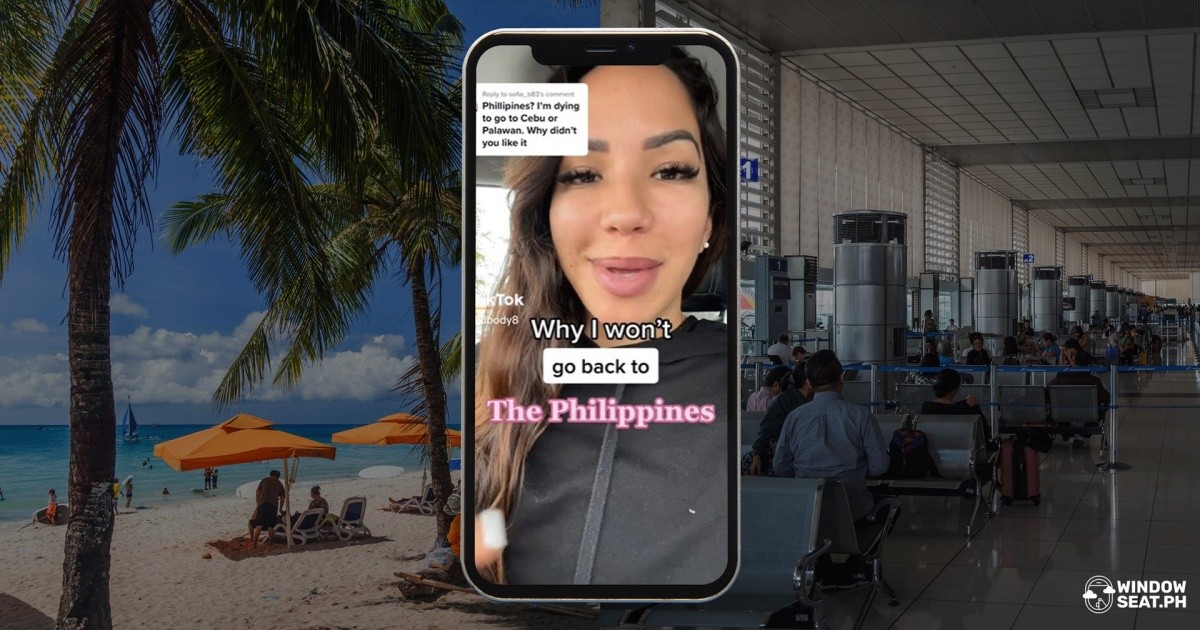