Tokyo Daydreaming: In the Aftermath of Summer Sonic 2016

This being a retrospective of the Radiohead-headlining Sunday installment in Chiba for the annual Summer Sonic music event, I am reminded of the first time I attended a day-long rock festival.

It was with my mother and her hippie-activist pals at Amoranto Stadium in Quezon City. While I remember the sets of POT and The Eraserheads, plus some violence in the mosh pit being perpetrated during the set of The Wuds (or was it Tropical Depression?), what I do remember the most was the exhaustion. A bone-weariness that still felt like a sense of accomplishment. Even if every third person along the lower rafter seats was wrapped in a blanket, there was an awareness of community. Some rapport that, behind closed lids whether you were just resting your eyes or actually napping, you belonged in this soup of sweat, sporadic outbursts of violent motion, and sonic glory. Like a homecoming

I remember falling asleep in my mother’s arms and being woken up as the last set ended. “Wake up, son, we need to avoid the traffic going home!” And I was promptly hustled out the stadium and onto a jeepney.

Six years ago my mother passed away, but this remains one of the most vivid, shared memories I have of her. The lesson: that live music was intrinsically a shared experience. As a corollary it must be, to have dimension and flavor in one’s memory, also something shared among friends and loved ones. A communion wafer savored and passed around in ceremony and charity.

To this day the expanse of a huge arena filling up with people, the smell of grass torn up and trampled underfoot, and the anticipation of a performance that makes the air electric, pregnant with meaning, reminds me of that first time at a festival. It all takes me back to my mother’s embrace, falling asleep to loud guitars.

Which brings me to a sweltering Sunday, August 22. On the train from Tokyo to Chiba with my wife, expecting passage to catharsis and spectacle with two tickets to Summer Sonic. It’s an hour long ride, but so fast and covers so much distance that you can’t help but marvel at Japanese engineering. The Summer Sonic Festival is a massive, annual two-day (sometimes three day) rock festival held at the same time in Osaka and Chiba. But counting airfare and food and billeting, we only had enough money to plunk down for one day. So we opted for the day that Radiohead were headlining (Aug 22), instead of the one with rocktronica giant Underworld (Aug 21).

Four days in Tokyo, with its urban koans of alternating silence and stimuli, is not enough to scratch the surface of a city or begin to develop an understanding of sense of place. Still, because the cup of any aural event of this magnitude runneth over, here’s a collection of post-event thoughts and a few revelations of a first-time traveler to Japan. And how such a huge music festival may be experienced in full, or at least endeavored to. From Haneda airport to our billet in Asakusa, and Iriya Station in Asakusa (on the Hibiya Line) to Kaihin Makuhari in Chiba (on the Keiyo Line) which is the nearest station to Makuhari Messe (the venue for Summer Sonic), Japan’s railway system is the first thing you’ll need to wrestle with if you want to get anywhere in Tokyo’s vast metropolis. Especially true since taxis are so prohibitively expensive—one snafu had us running up to PHP6,000 in cab fare in just a couple of kilometers.

The urban planners of Tokyo’s subway system are mad chefs, all of them. But there is definite method to the madness of the sub and the el lines, an internal logic to the labyrinthine, epic snaking mess and mastering its arcane intricacies is key to cajoling the city to reveal its secrets. For seasoned Pinoy commuters, used to the failures and serpentine lines of the MRT and LRT, doing this will be a cinch; immediately get a Pasmo (stored value card) and load it up with Yen. Ask the Japanese information desk right off whichever airport you land for advice on planning your routes, or make Google Maps your friend—previous travelers have tackled all this and laid down the way. Also, don’t be afraid to ask: the Japanese are infinitely courteous and will help you out if they have even some rudimentary English, or install one of those translator apps and be sure to download the Japanese pack for offline use.

We made it to our Airbnb straight from the airport sans trouble, and repeated the same to Roppongi Hills, Suidobashi district, and to far flung Chiba. Don’t worry, even the Japanese get lost on the rails from time to time.

Thou shalt walk: The festival grounds are huge

QVC Marine Field (a baseball arena) by itself holds 30,000 people and Mukahari Messe’s convention center halls cover 855,710 square feet. That’s plenty of walking or biking—if you can rent a bike and are confident with your riding skills, do so, this is the preferred mode of transport of Tokyo citizens from soccer grandmas, suit-and-tie salary men, to teen hipster girls twinning in the exact same clothes (it’s a thing everywhere we went).

I must emphasize that you cannot underestimate the distance between the Summer Sonic stages: trudging for 20 minutes under the hot summer sun from the Makuhari Messe Convention grounds to the Marine Stage is no joke, even with the sea breeze coming in from the Beach Stage. Stock up on water and hydrate. Rest when you must. Ask for help from the festival staff (easily identifiable in uniform) if you get in trouble or feel sick.

Creativeman President Naoki Shimizu has been orchestrating this monster of a festival since its debut event in 2000. Along with Fuji Rock (whose venue has more of a provincial air in the shadow of the mountain), Summer Sonic is the flagship festival of Japan and, the concept of a two-day event held at the same time in Osaka and Chiba, the majority of the bands playing in Osaka the first day go to Chiba the following day and vice versa, has become such a huge draw for both local and foreign music lovers. Meaning, Shimizu’s guys have had more than a decade to perfect the craft of making this behemoth move fast, start and stop on time, and always retain maximum enjoyment for the ticket buyer.

It helps that First World Japan makes you a stickler for obeying rules, it also helps that everything works (I do mean, everything): at the Marine Stage massive amounts of people are ushered by batches by squads of personnel, inside the arena overlapping tarpaulins cover the floor (ensuring minimized mud should it rain), and said tarpaulin’s holes were covered by duct tape—if a tear should be noticed, one of the staff is quick to cover it up. There are food and water vendors at strategic points, even the darn portalets were decent enough—a far cry from the Philippine’s outdoor festivals I’ve gone to.

Prepare thy body for Tokyo Festival going, especially one this size, will take its toll no matter how physically fit you are, no matter what age you are. Similarly, Tokyo is Summer Sonic on an even larger scale and the breadth and depth of its sensory stimuli can be too much to take at once.

The many strange, contrasting nuances of Japanese culture measured against a Third World citizen’s perception compels you to shock. Tokyo is tradition and technology dancing in a mad flamenco and colliding in fevered intercourse, its impact on your psyche like a sustained daydream. Kimono-wearing girls chatter on a phone call crossing the street while catching Pokémon with their other cellphone; a Buddhist monk in grey robes rides his bike down to the corner Family Mart; the cashier at a state of the art MMA store near the Tokyo Dome hands me a souvenir and bids me goodbye with a traditional “Osu!” In Asakusa, a temple district, where we were billeted, the street noise died down to almost nothing by 10p.m., but the raucous tourism and daily grind was up by as early as 6a.m. and the sun shining way high in the sky (light bulb moment: this is why it’s the Land of the Rising Sun).

Sci-fi author William Gibson put it succinctly, when he wrote in his essay “My Own Private Tokyo”: “Tokyo [is] sheer eye candy. You can see more chronological strata of futuristic design in a Tokyo streets cape than anywhere else in the world. Like successive layers of Tomorrowlands, older ones showing through when the newer ones start to peel.”

The Japanese crowds are meditative Let’s get this out of the way: Radiohead is superb live and they were in even more superb form that Sunday night accompanied by a hypnotic lights show. They opened with the new album track “Burn the Witch” and peppered their set with older classics like “Airbag”, “Everything in Its Right Place” and the monumental “Idioteque.” They even played their old 90s hit “Creep” (a rare treat), and closed with the epic, elegiac “Street Spirit (Fade Out).”

That said, trying to catch as many music acts as you can at the Summer Sonic fest is a fun exercise in futility. The concurrent times and distances between stages means: you can’t catch them all. What you’re paying for isn’t just the sight and sound of the English boys but the experience of shamanic ecstasy, a collective euphoria mitigated by the subdued and meditative nature of Japanese music lovers. They are quiet when the songs are slow and introspective; raucous and cheering when the singer asks them to participate. They do it with claps and dance moves, synced like a metronome. They shout and sing on cue.

A confession, as true as it is cliché: I have never felt or beheld anything like it. On stage, Thom Yorke is singing about how “Here I’m allowed / everything all of the time.” So am I.

Have you gone to a Japanese music festival? Share your memories with us in the comments below!

All Photos by Tanya De Mesa, except where indicated otherwise. 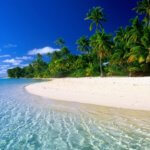 Tropical Life on the Cheap: 7 Budget Hotels in the Maldives Next